Only one lyric tenor on the scene today has the honeyed tone and ingratiating style to make comparisons to Pavarotti and Gigli seems serious, and it is Calleja, the man from Malta, who... is now maturing into an artist of the first rank." - New Yorker

Any doubts about the most winning lyric “Italian” tenor since Pavarotti tackling this heavy Verdi repertoire are largely dispelled by the vitality of his sunny sound and the clarity of his diction. - The Sunday Times Hugh Canning

Renowned Maltese tenor Joseph Calleja is one of Malta’s proudest exports, and it’s always great to see the homegrown star receive the recognition he deserves. But being given the key to a US city is truly something else!


In a post on the star’s Facebook page, the tenor writes “So this happened yesterday in Naples Florida. I was given the ‘key’ to the city and the 21st of March was officially declared as ‘Joseph Calleja’ day!” – isn’t that amazing?

Joseph Calleja is currently in the US performing in Puccini's Tosca, which will run through 6th April. 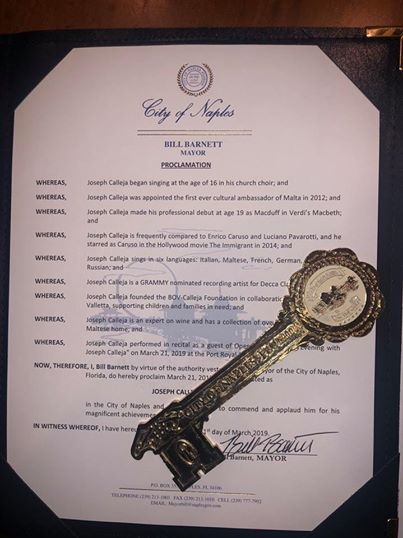